From our Video FAQ series: How to turn on tangential cutting?

The main settings for the tangential knife/creasing wheel/etc can be found in Config > Technology > Tangential Knife on the following screen: 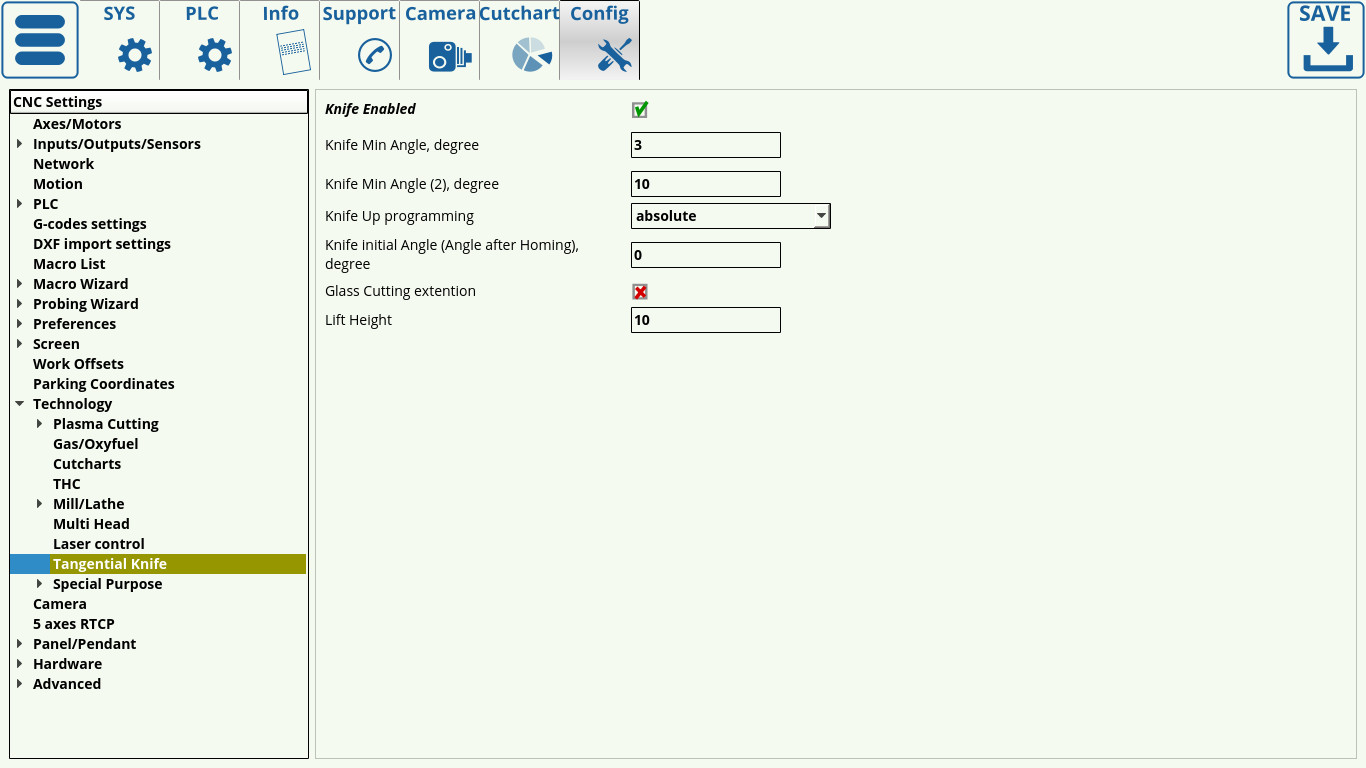 In order to enable the system, change the flag in the Knife Enabled line to ON (green). If you later navigate to the main screen of myCNC software, the indicator on the tangential knife icon will show whether the system is on or off, without having to go to the settings (red for ON, grey for OFF). 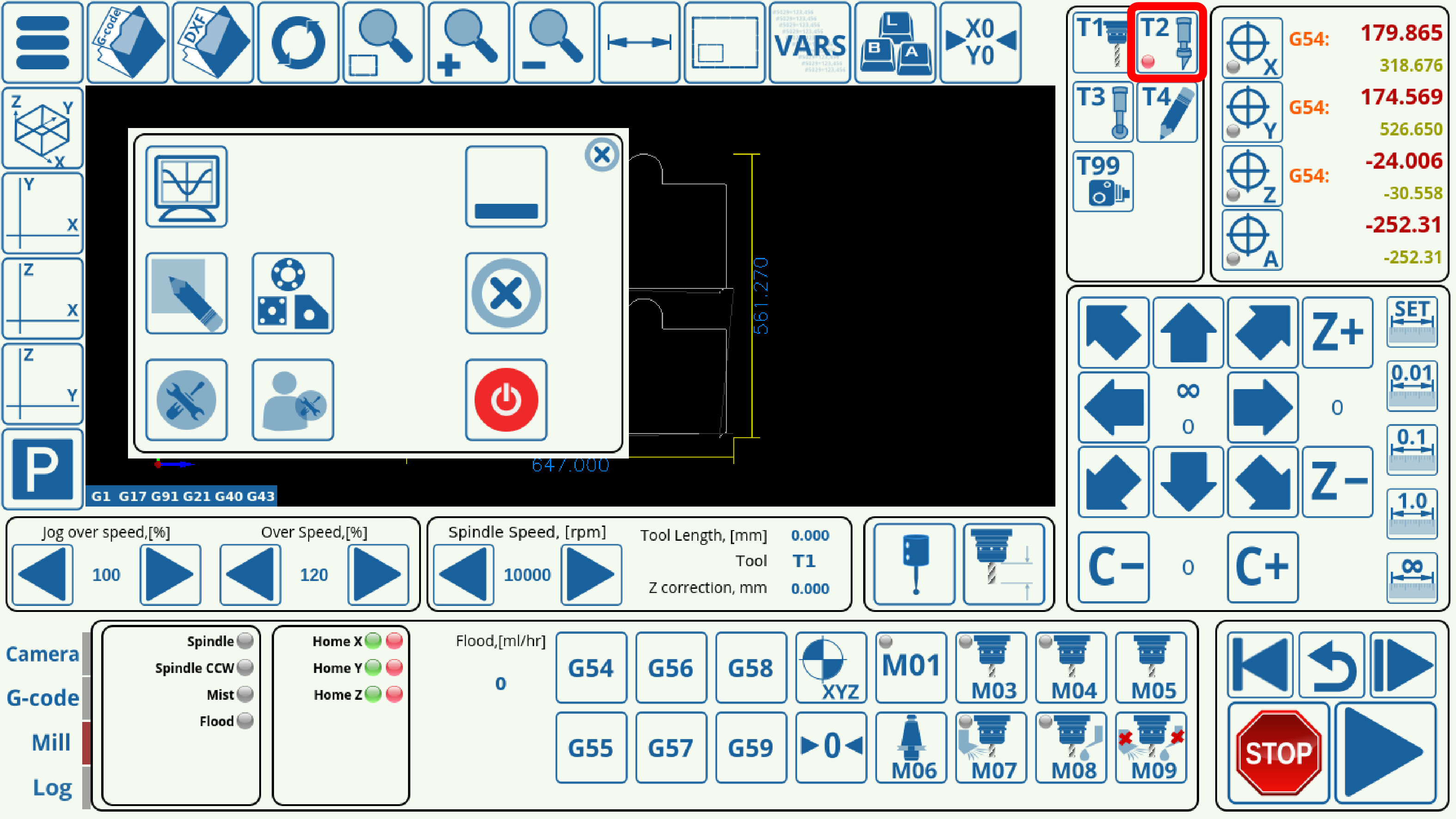 Knife Min Angle values signify the largest angles at which the machine will still be turning the knife without lifting it. The first Knife Min Angle value signifies the maximum angle of such a turn as to allow the machine to begin rotating the knife before reaching the corner of the turn itself. This is useful when working with pliable materials which allow for some bending, in order to achieve a cleaner overall cut.

The second Knife Min Angle (2) signifies the maximum angle of a turn such that the machine can rotate the knife right at the corner without lifting the knife up. This is usually a higher value than the first Min Angle. 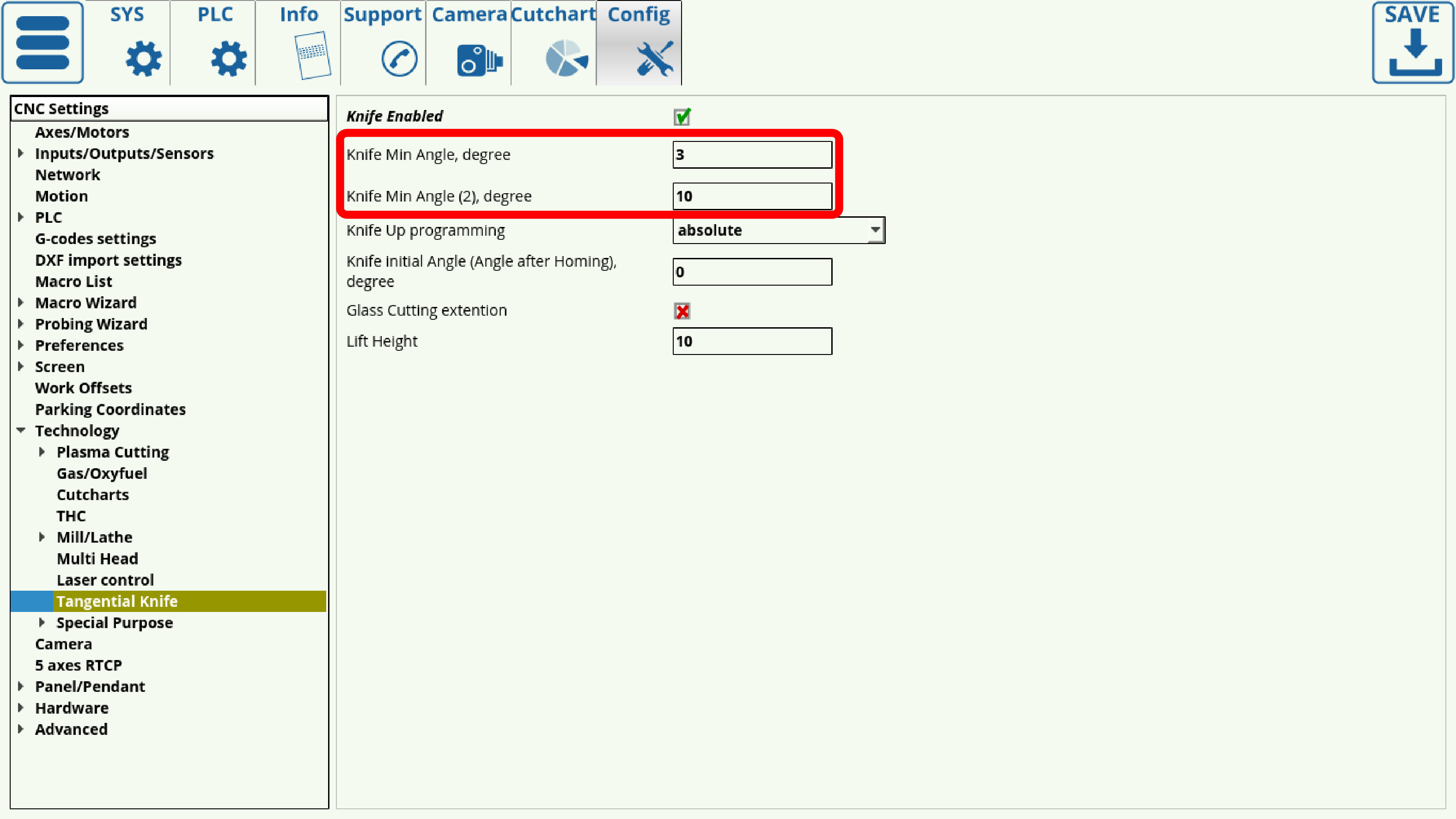 A value that is higher than Knife Min Values (meaning a sharper turn) will make the machine reach the corner and lift the knife up to its programmed lift height. 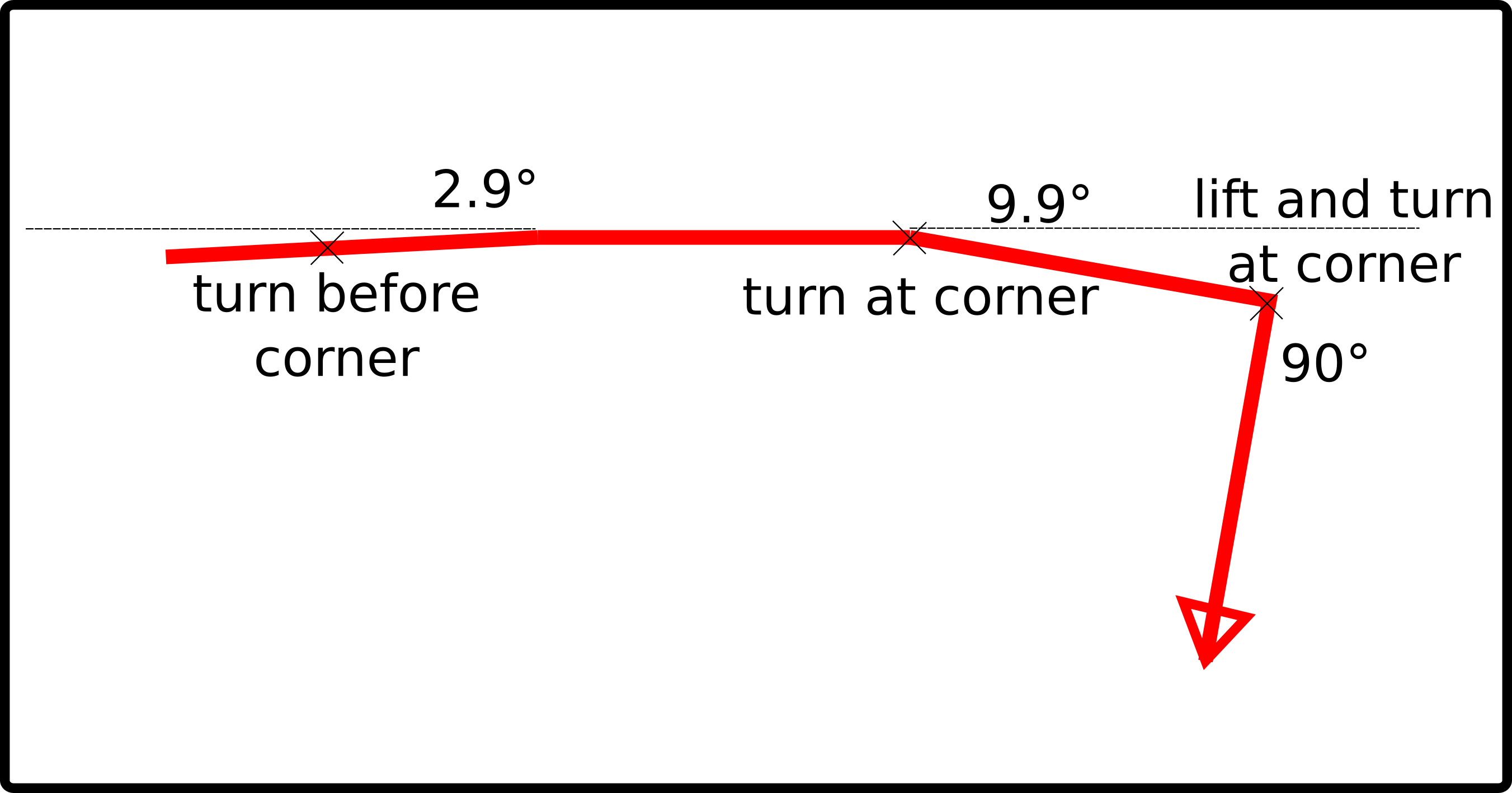 As can be seen in the example above, our Min Angle values were 3 and 10 degrees respectively. Thus, the machine will start turning the knife before reaching the 2.9 degree corner, then will continue to travel up until the 10 degree corner at which it will turn the knife again (all of that without lifting). At the 90 degree corner, however, it will lift the knife first before turning it, as the turn is too sharp for the knife to be rotated while still embedded in the cutting material.

The Knife Up programming field specifies the behaviour of the knife during the lifting phase, which can be set to absolute and incremental. Absolute takes the value of the Lift Height and lifts the knife to that point in the z-axis regardless of its previous position, while the incremental mode adds the Lift Height value to its original cutting position and lifts it to that height. Both methods have their merits, and can be switched between depending on the operator's needs. 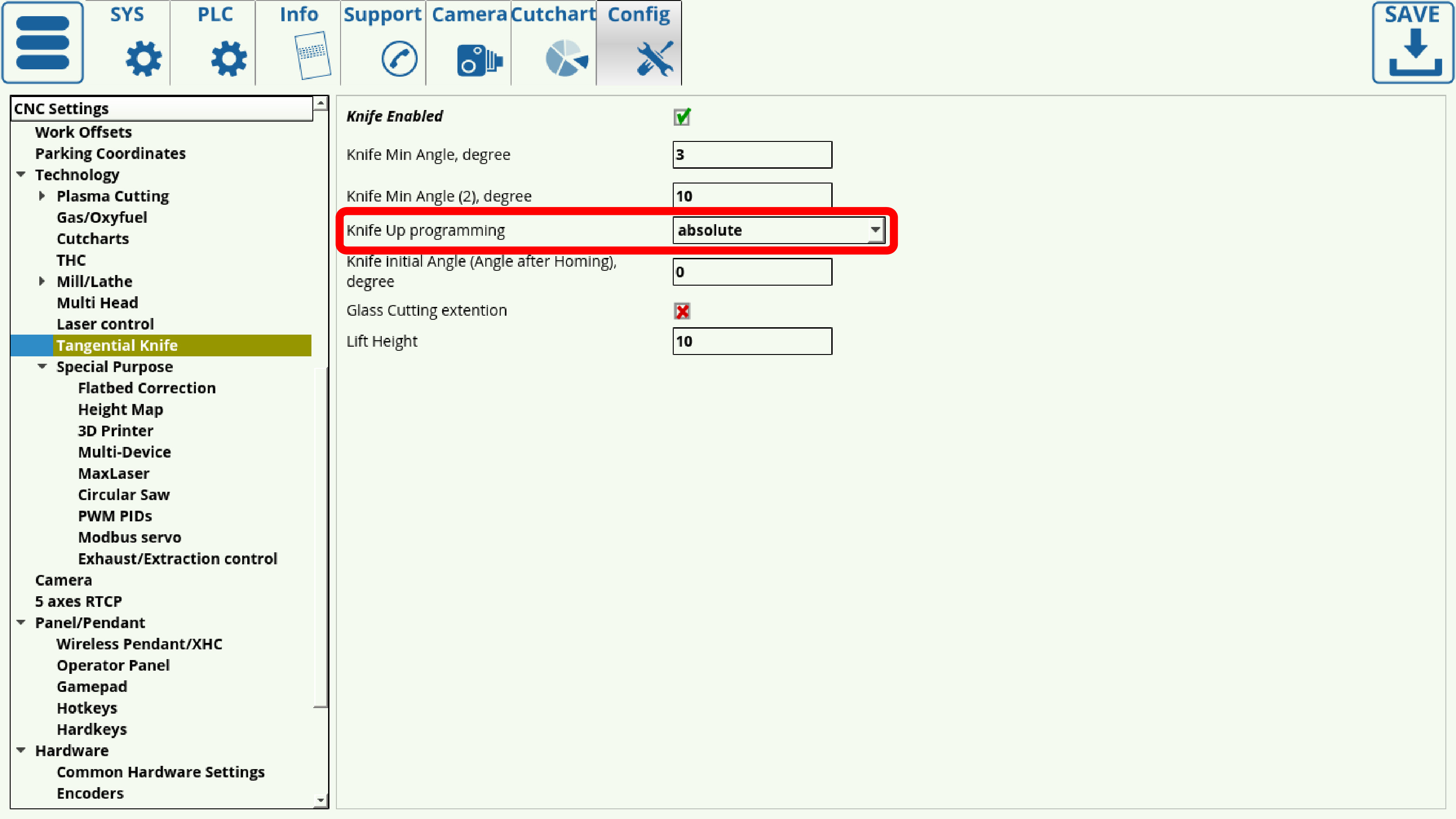 The Angle after Homing degree is usually left to be at zero, however that can be altered depending on the needs of the operator and the specific configuration of the machine.

The Glass Cutting extension can be toggled to be ON or OFF, depending on the specifics of the machine.

Lift Height specifies the height for the lifting procedure, as described in the Knife Up Programming. This value is set to be in millimeters.

The X1366V profile allows for tangential cutting control not only with a simple cutting knife, but a variety of other tools such as a half-knife, creasing wheel, 45 degree knife, and more. Tools can be combined into a single job by importing a DXF file with pre-defined layers which will be assigned to different technologies. If a tool does not require tangential cutting control (such as a spindle), it can also be defined in the myCNC software to be assigned to a separate layer/pen in the DXF/HP-GL file respectively.

The important part about tangential cutting control is the ability to use the rotation axis (axis C in the X1366V profile). This is turned on by the following code that is included in the M6 macro (the M6 macro is responsible for switching between the tools):

Similarly, turning tangential cutting off is done by using the following code in the M6 macro:

This allows us to use the rotation axis when necessary by writing a 1 or a 0 into the register #7005: 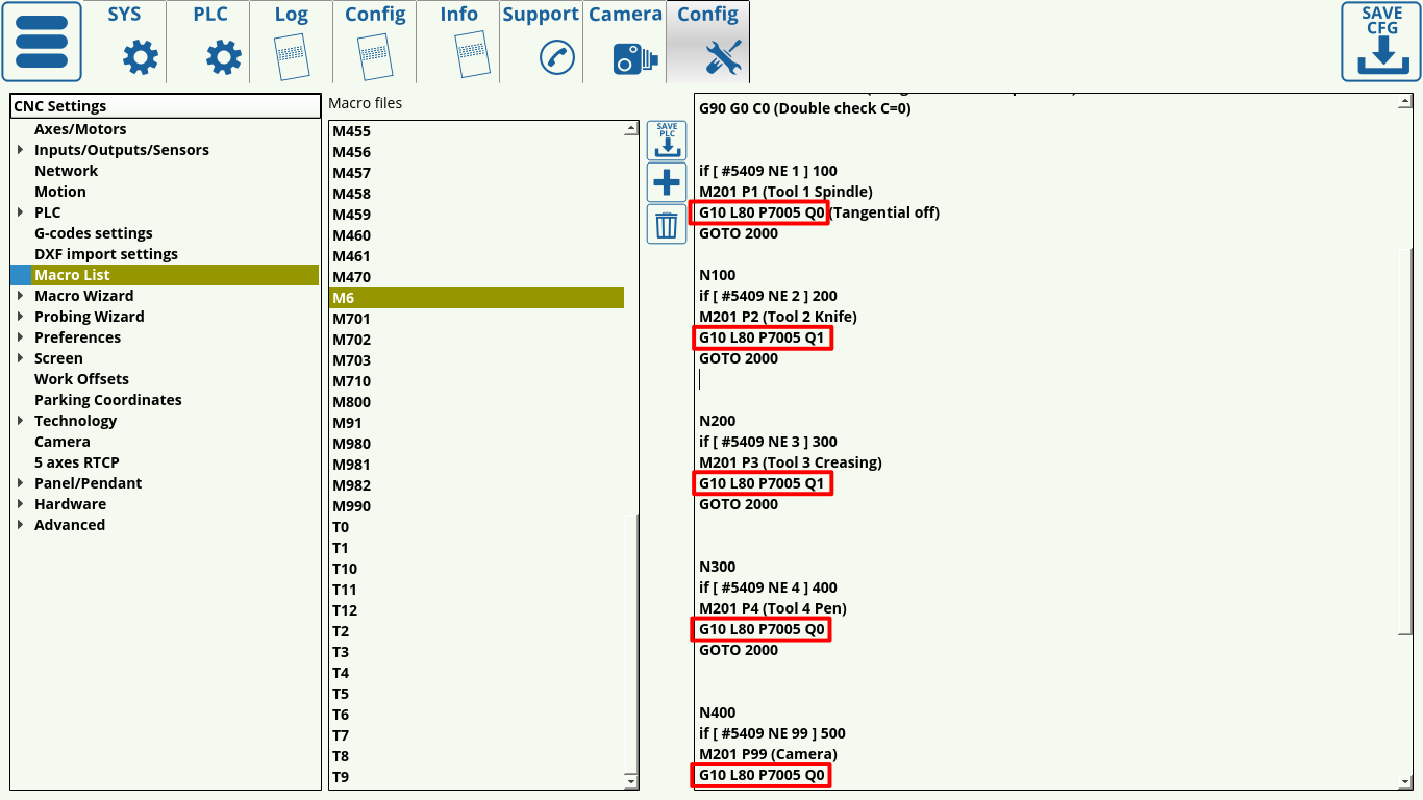 Since having a number of tools in the same program is typically necessary, we can turn tangential cutting (utilizing the rotation axis) only for the tools that require it, such as the Knife and Creasing Wheel (shown in the screenshot above). The other tools (camera, pen, spindle, etc) will have tangential cutting turned off by having their register #7005 contain a 0.

Using register #7005 therefore allows the operator to utilize a variety of tools with tangential control features.

Upon pressing the Open DXF file and navigating to the particular file you would like to open, the following window is shown: 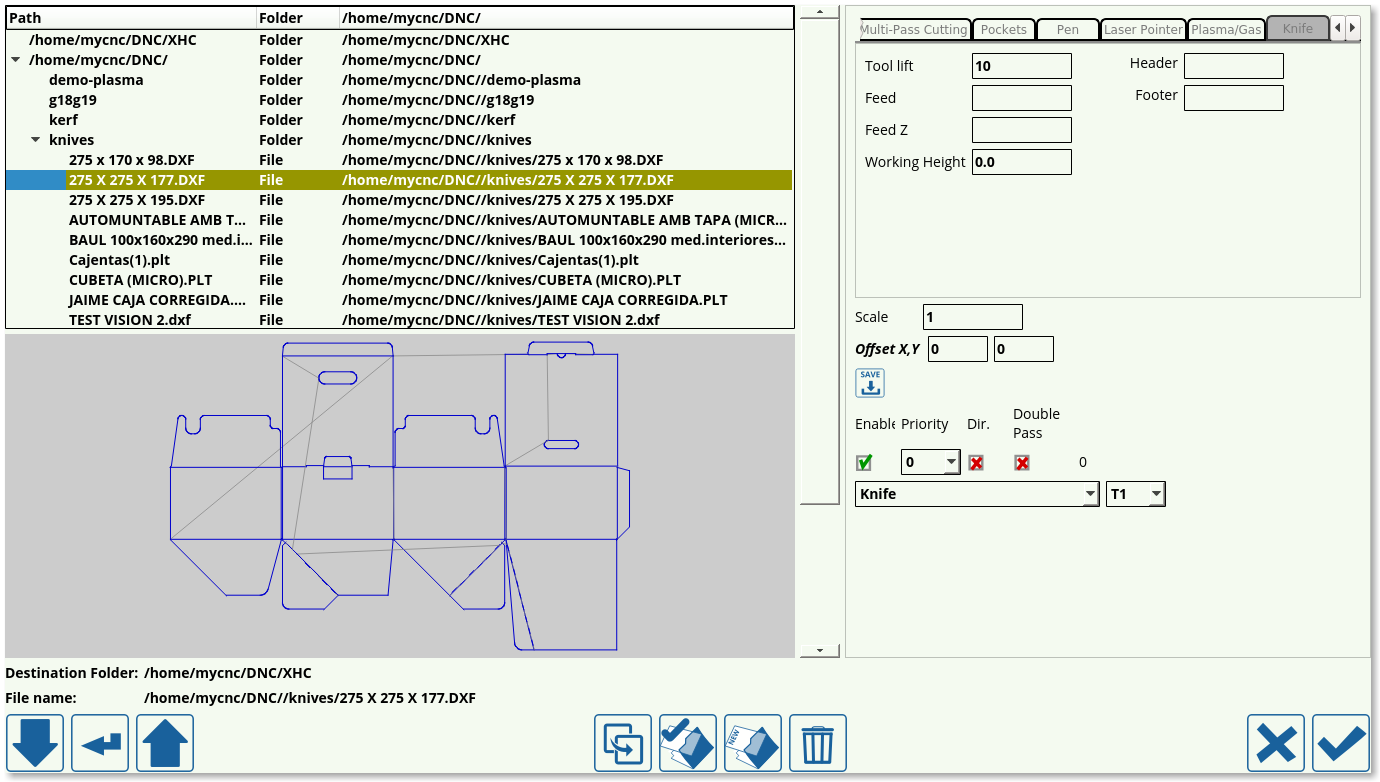 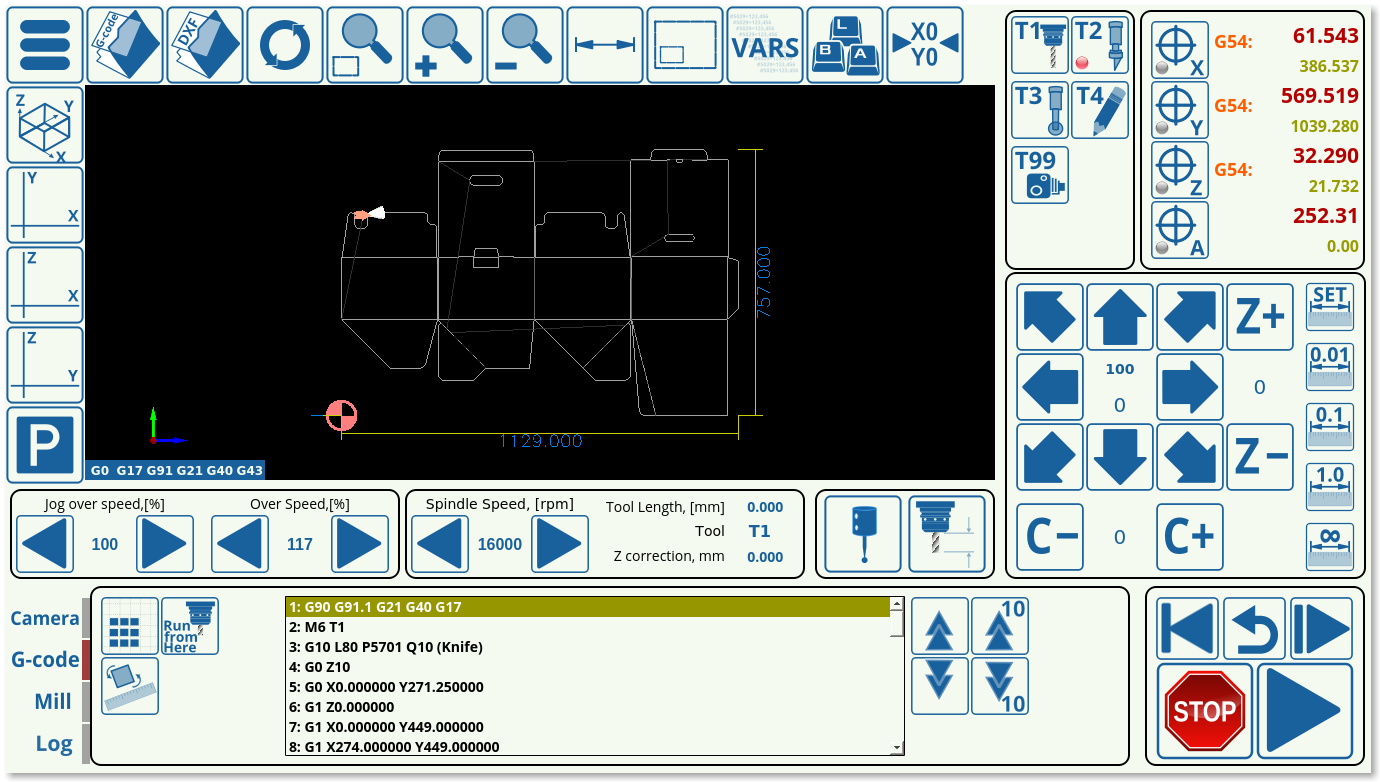 The DXF import procedure automatically generates the knife turn/knife lift G-codes which are inserted into the program, and which correspond with the settings listed in Config > Technology > Tangential Knife. This allows for easy set up provided the DXF file has been correctly modelled.

A full manual on importing DXF files is available here.