This article discusses the flatbed correction feature built into myCNC software which is often useful when the working table is not even or has certain spots which are higher or lower than the reference position. This is especially useful in cases when something like a tangential knife needs to go over the uneven table, resulting in a cut that does not actually go through the working material properly, or alternatively a cut that goes far too deep into the material.

In order to account for this, flatbed correction is used.

The following video goes over the basic process of setting up flatbed correction within myCNC software:

To set up flatbed correction, go into Settings > Config > Technology > Special Purpose > Flatbed Correction. The screen presented to you will be the following: 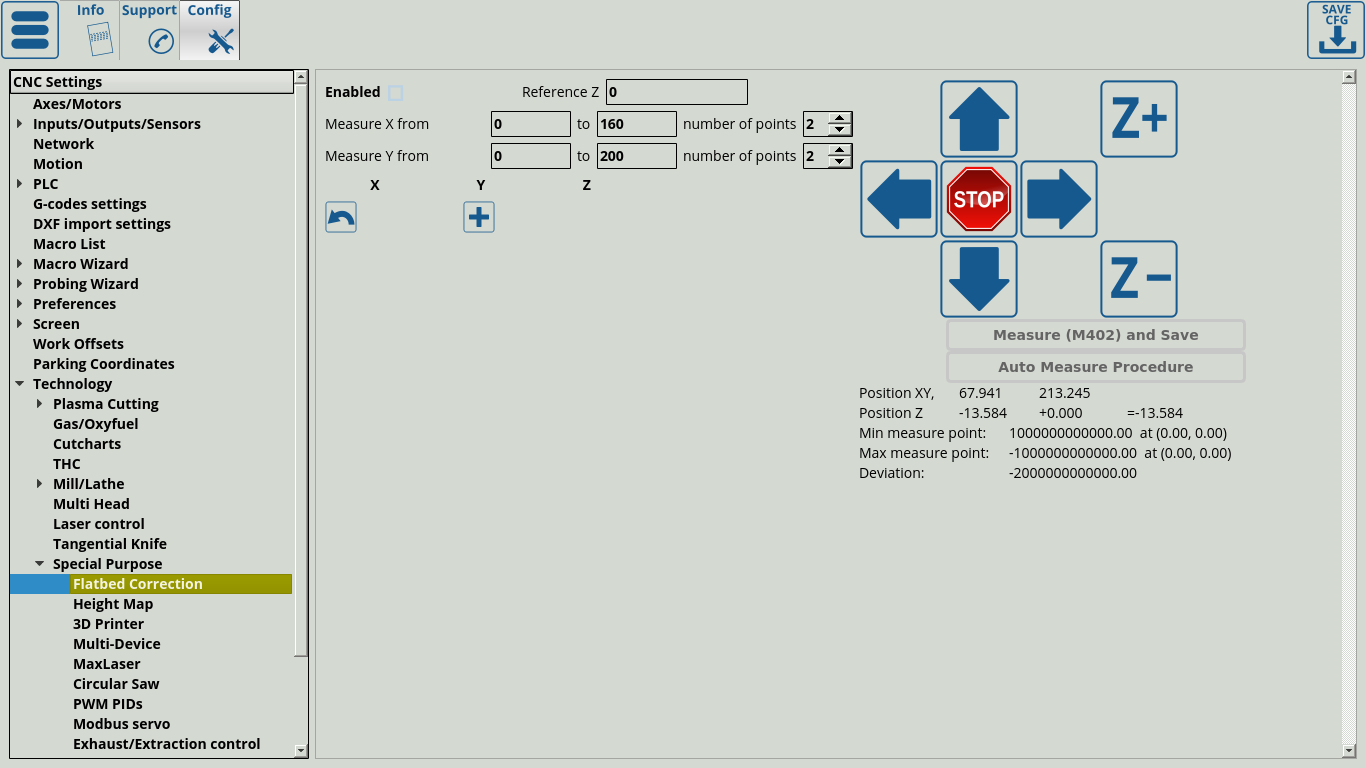 After the setup process has been completed, a table of points in the XY-plane and their Z-positions will be presented on this page. These values can either be recorded by using the AutoMeasure procedure, or by using a sensor and recording each point individually by using the M402 macro. Using the AutoMeasure procedure, the operator can set the measurement distances for the X and Y axes as well as the number of points at which the height measurements will be taken for the XY-plane.

To begin the probing process, the Auto Measure Procedure button can then be pressed. Note that if you leave the flatbed correction setting screen while the procedure is running, the measurement program will be paused until you return back to the screen.

In order to use the M402 macro for manual point measurement, move the sensor to the position you want to measure, then press the Measure (M402) and Save button. This will lower the sensor down until contact, then lift it back up and record the z-position at which the sensor was triggered.

After the measurements have been taken and the Reference Z has been entered, press the Save CFG button, enable Flatbed correction and reload the application.

By adding these correction points, myCNC software will create an updated Z-axis map of the working table. From here on, whenever Flatbed Correction is enabled, the machine will automatically adjust the z-axis height of the working tool in order to adjust for the table level changes depending on where in the XY-plane it currently is.

The code for the M402 macro can be found below: